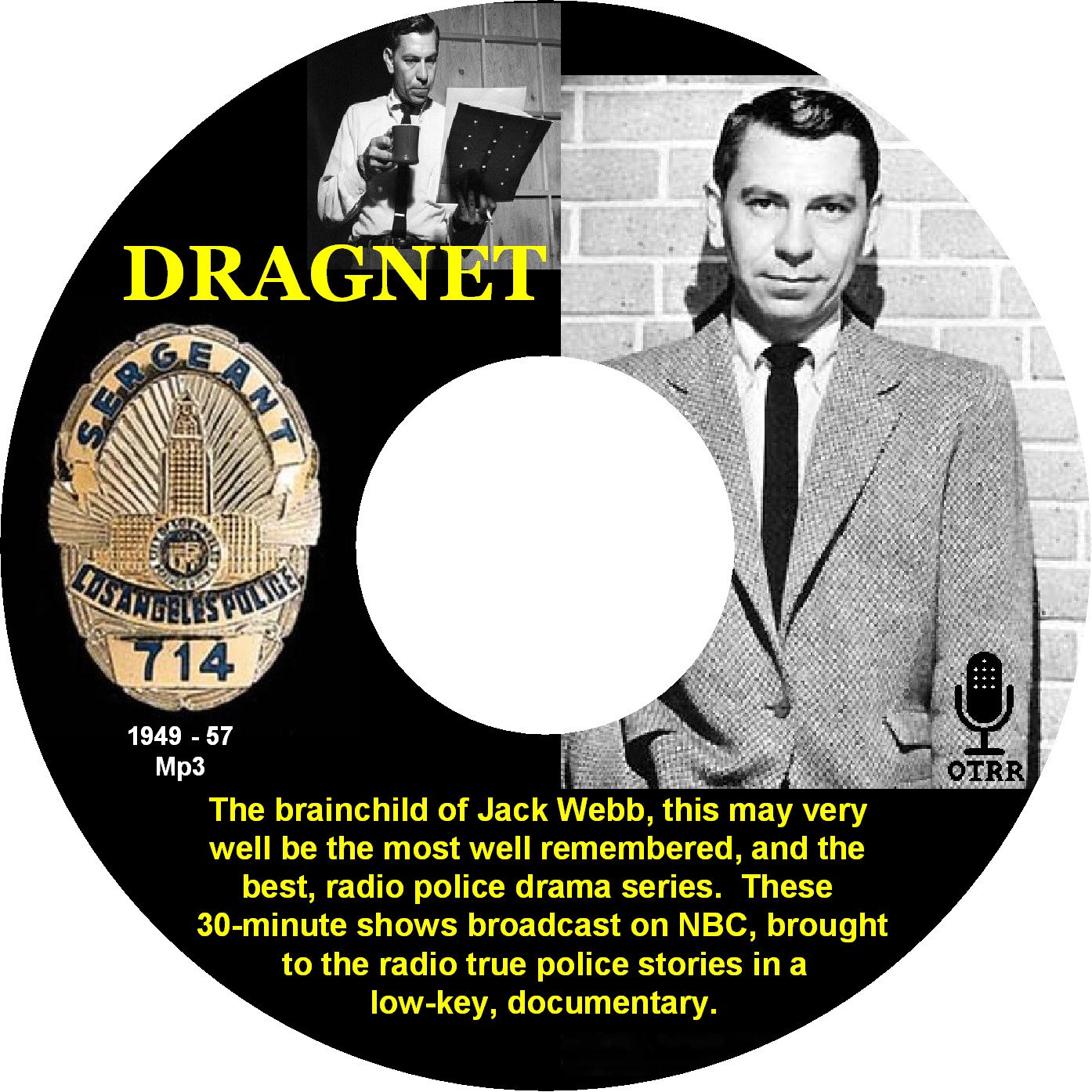 Dragnet, the brainchild of Jack Webb, may very well be the most well-remembered, and the best, radio police drama series. From September, 1949 through February 1957, Dragnet's 30 minute shows, broadcast on NBC, brought to radio true police stories in a low-key, documentary style.

The origins of Dragnet can be traced to a semi-documentary film, "He Walked by Night" from 1948, in which Webb had a small role. Both employed the same Los Angeles Police Department technical adviser, used actual police cases and presented the case in "just the facts" manner that became a hallmark of Dragnet. It is interesting to note that Webb employed that format in other radio series, some pre-dating the film mentioned above.

Dragnet was a long running radio and television police procedural drama, about the cases of a dedicated Los Angeles police detective, Sergeant Joe Friday, and his partners. The show takes its name from an actual police term, a dragnet, meaning a system of coordinated measures for apprehending criminals or suspects.

Dragnet was perhaps the most famous and influential police procedural drama in American media history. The series gave millions of Americans a feel for the boredom and drudgery, as well as the danger and heroism, of real life police work. Dragnet earned praise for improving the public opinion of police officers.

Actor and producer Jack Webb's aims in Dragnet were for realism and unpretentious acting. He achieved both goals and Dragnet remains a key influence on subsequent police dramas in many media. The shows cultural impact is demonstrated by the fact that even after five decades, elements of Dragnet are known to those who have never heard nor seen the program. The ominous four note introduction to the brass and tympani theme music, titled Danger Ahead, is instantly recognizable as well as the shows opening narration:

"Ladies and gentlemen, the story you are about to hear is true. Only the names have been changed to protect the innocent."

When Dragnet hit its stride, it became one of radio's top rated shows. Webb insisted on realism in every aspect of the show. The dialogue was clipped, understated, and sparse -- influenced by the hard-boiled school of crime fiction. Scripts were fast moving, but didn't seem rushed. Every aspect of police work was chronicled, step-by-step. From patrols and paperwork, to crime scene investigation, lab work and questioning witnesses or suspects. Webb was a stickler for accurate details, and Dragnet used many authentic touches, such as LAPD's actual radio call sign, KMA-367, and the names of many real department officials, such as Ray Pinker and Lee Jones of the Crime Lab, or Chief of Detectives, Thad Brown.

"The story you are about to hear is true. Only the names have been changed to protect the innocent."

Hal Gibney described the basic premise of the episode. For example, "Big Saint", from April 26th, 1951, begins with:

"You're a detective sergeant. You're assigned to auto theft detail. A well organized ring of car thieves begins operations in your city. It's one of the most puzzling cases you've ever encountered. Your job -- break it."

The story usually began with footsteps and a door closing, followed by Joe Friday intoning something like:

"Tuesday, February 12th. It was cold in Los Angeles. We were working the day watch out of Robbery Division. My partner's Ben Romero. The boss is Ed Backstrom, Chief of Detectives. My name's Friday."

Friday offered voice-over narration throughout the episodes, noting the time, date, and place of every scene as he and his partners went through their day investigating the crime. The events related in a given episode might occur in a few hours or might span a few months. At least one episode unfolded in real time, in "City Hall Bombing", from July 21st, 1949. Friday and Romero had less than 30 minutes to stop a man who was threatening to destroy the City Hall with a bomb.

At the end of an episode, announcer Hal Gibney would relate the fate of the suspect. They were usually convicted of a crime, and sent to the state penitentiary or a state mental hospital. Murderers were often executed in the manner proscribed by law. Occasionally, police pursued the wrong suspect, and criminals sometimes avoided justice, or escaped, at least on the radio version of Dragnet.

Scripts tackled a number of topics, ranging from the thrilling (murders, missing persons, and armed robbery) to the mundane (check fraud and shoplifting) -- yet, Dragnet made them all interesting due to the fast moving plots and behind the scenes realism. In "The Garbage Chute", from December 15th, 1949, they even had a locked-room mystery. Though rather tame by modern standards, Dragnet, especially on the radio, handled controversial subjects, such as sex crimes and drug addiction, with unprecedented and even startling realism. The tone was usually serious, but there were moments of comic relief. Romero was something of a hypochondriac, and often seemed hen-pecked. Though Friday dated women, he usually dodged those who tried to set him up with marriage-minded dates.

Due in part to Webb's fondness for radio drama, Dragnet persisted on radio until 1957, as one of the last old time radio shows to give way to television's increasing popularity. In fact, the TV show would prove to be effectively a visual version of the radio show, as the style was virtually the same. The TV show could be listened to, without watching it, with no loss of understanding of the storyline.

Reviewer: Icemansix - favoritefavoritefavoritefavorite - February 1, 2020
Subject: Lost episodes
First, whatever happened to episode 1? And there are others missing from the sequence. Does anyone know the answers, and if there is a complete set available?

http://www.otrr.org/FILES/Scripts_pdf/Dragnet/
Reviewer: ArchiveDotOrgAccount - favoritefavoritefavoritefavoritefavorite - June 6, 2019
Subject: Script for the first episode at THIS link...
I'm not sure how I found this link, but there it is, in all of its glory. No audio, but for those who seek the script of episode one, it's online to see and read!

Seriously, great series, I really get a kick out of hearing the old commercials about the Chesterfield cigs and how "They are the only ones that have been proven to have no adverse effects on Ears, Nose or Throat" LMAO... No wonder they won't allow those commercials any longer...
Reviewer: MichaelZ13X - favoritefavoritefavoritefavoritefavorite - October 20, 2017
Subject: Hats off to whoever set this up!
What a great collection! Love the tv and radio episodes of the Jack Webb Dragnet show! Although I believe all the episodes are true accounts, I also realize they are spiced up a bit with some humor at times, but I appreciate that. Also, many of the gun fights seem to be added since I never hear of the resulting assault with a deadly weapon charges at the end of the show.
Thanks to all that put this together!
Reviewer: jtyroler - favoritefavoritefavoritefavorite - March 2, 2017
Subject: LAPD's Propaganda
Before Dragnet started, the Los Angeles Police Department's reputation was very low - high profile, unsolved crimes like the Black Dahlia and the murders of Georgette Bauerdorf and Jeanne French, the Flying Nurse, and accusations of large scale corruption, the LAPD needed something to put them in a better light. Dragnet was a great way to do just that. The high profile unsolved cases made the headlines in the Los Angeles and other newspapers while many other cases were being solved - all sorts of cases: drugs, murders, kidnapping, etc.

19-Nov-2009: Version 2.0 -- Fixed "The Big Siege", plus added some AFRS episodes.
Reviewer: adamelijah - favoritefavoritefavorite - November 22, 2009
Subject: The Big error
I e-mailed someone at OTRR quite some time ago, but this still hasn't been fixed. The episodes identified as 1951 shows "The Big Lover" and "The Big Trunk" are incorrectly identified. Both shows begin with Friday stating that his partner is Frank Smith. However, Friday didn't have a partner named Frank Smith in 1951. His smart until the last show of 1951 was Ben Romero, and he didn't have a partner named Frank Smith until 1952.
Reviewer: davidinberkeley - - August 17, 2009
Subject: Faulty file
Keep in mind that the file Dragnet 55-05-24 (301) The Big Siege above is faulty and plays at chipmunk speed.

Which is okay for folks who like that!
Reviewer: XMinusOne - favoritefavoritefavoritefavoritefavorite - November 23, 2007
Subject: Nothing can be said about Dragnet that hasn't already been said
Dragnet, Gunsmoke, Jack Benny, Amos 'n' Andy. Four of the most respected, well liked, well received, and high rated series in old time radio. What they had was excellent story lines, story lines and scripts that were believable, continuity and character development (Lux Radio Theater, on the other hand, had stand-alone shows that didn't allow for character development), characters (even though Jack Benny and Amos 'n' Andy were comic characterizations) that people could relate to. Dragnet had excellent scripts and generally intense acting, the result of a line of radio shows that Jack Webb was involved in, ultimately transitioning successfully (as with the other three shows) to television with little change in format or character. If four different people each picked a different one of the four shows as the "best" of old time radio, I would have a hard time disagreeing; but, even if they didn't pick Dragnet as crossing the "best of OTR finish line" first, it would be a photo finish. As an aside, if you wanted to see a "different" Jack Webb, try to find episodes of his early radio show broadcast from San Francisco; it was along the lines of Steve Allen's radio and television shows, and showed his appreciation of jazz (highlighted in Pete Kelly's Blues).